News
You are here: Home1 / News2 / News3 / Blog4 / The World is changing and we’re changing along with it

As I start to look at what will soon be my fourth decade in the Bulk Fluid Transfer industry and, with some time to reflect on what changes have occurred in that time.  I suppose, from a technology viewpoint, the methods and flexibility of how we now work were inconceivable when I started.  I reminisced with a former colleague earlier today, about how the distinctive chatter of the Telex machine sent a buzz of anticipation around the sales office.  It was so much more immediate and urgent than a letter.  Yes, hands up who remembers getting inquiries by letter? Golfball typewriter anyone?  The fax machine then crept into our lives along with the chronic waste of paper generated by spam advertising for car leasing deals and, ironically, cheaper fax paper.

Communications have come a long way.  Instant meetings: face to face, with colleagues, suppliers and customers, across the world.  All with startling clarity and the ability to share and participate in documents.  These quantum changes only need to be working for a week before we take them for granted.  We moan if a screen pixelates for a second.  No-one misses the analogue chatter of the telex or a dial-up modem and rightly so.

So, how will the world work after “this”?  Is Covid-19 also the carrier of technical transformation?  “This” is a global event.  We all hope and pray that it dissipates as quickly as it arrived and claims far fewer victims than some suggest it may take. But, when it has gone, what will the new normal look like?

I’ve been doing some light reading on Industry 4.0. Yes, really.  Five years ago, it was seen as an ambitious dream by most laymen.  Even last year, most of the industries in which Carbis Loadtec works would have it listed as “things to consider in the near future”.  But now, sitting in our homes, trying to carry on as if this is normal; the reality of a world where there is less travel, less personal interaction, less pollution, starts to make a lot of sense.

Let’s take the Wikipedia version of Industry 4.0 and trim it up a bit. Then reflect on how it can translate to the Loading of Bulk Fluids globally.

Interconnection:  The ability of machines, devices, sensors and people to connect and communicate with each other via the Internet of Things (IoT) or the Internet of People (IoP).  I think that’s what I’m doing, in a crude form, to send this message.  If I had a Pound/Dollar/Euro for every time I see the word “connectivity” in a day, I might be retired by Christmas.  But this is the reality. It is the ability to communicate with thousands of people around the world, on a number of platforms.  Not just the written word.  Video, graphics, you name it.  The postal letter of our new age now moves at the speed of light.  Much used, often abused.

Information Transparency: The transparency afforded by Industry 4.0 technology provides operators with vast amounts of useful information they need to make appropriate decisions. Inter-connectivity allows operators to collect immense amounts of data and information from all points in the manufacturing process, aiding functionality and identifying key areas that can benefit from innovation and improvement.

40 years ago, I had an A-Z of the UK, a 1.6 Ford Cortina and a time, agreed by telephone, to meet a client. Traffic problems, road works, rest stops were guessed the night before and off I would set with a map laying on the passenger seat.  No, cell phone to communicate that I might be a couple of minutes late. No e-mails, texts or WhatsApp to distract.  Just the radio or a box of cassettes to pass the time.  Halcyon days.

Now, the reality is that a person, sitting at a desk or out walking or from a beach, somewhere on the planet; can track a fleet of road tankers, their speed, route and estimated time of arrival based on real-time traffic.  How often do we stop and say “Wow”?  Because it really is amazing.

So, we know where the tank trucks are. We know when they will arrive, and we should know how long they will be at a site, loading or unloading.  Or do we?  Do we know whether the site is clear to receive the tanker?  Do we know if the bay is occupied with tankers waiting?  If so, the time planning is always an emergent strategy, because we cannot control what we don’t know.

Technical Assistance:  First, the ability of assistance systems to support humans by aggregating and visualizing information comprehensively for making informed decisions and solving urgent problems at short notice. Second, the ability of cyber-physical systems to physically support humans by conducting a range of tasks that are unpleasant, too exhausting, or unsafe for their human co-workers.

Imagine, that when a driverless tanker arrives at a site, the security check is automated. Scanners check the vehicle, verify why it is there and send it to the correct loading spot. A 24/7 operation with no security guards.

It drives to the loading spot and parks, with pin-sharp precision every time. No shuttling back and forth to find the sweet spot.

A robot arm reaches out and connects to the earthing socket, providing secure grounding, continuously relaying important status data on the condition of the tanker.

The Loading Arm moves out to the tanker, relaying, in real time, every movement and action to a central data hub. This shows time elapsed and the time to run before the Tank Truck is released to leave.

As it approaches the manhole, the Loading Arm communicates with the Tank Truck and the manhole opens automatically upon agreed security protocols.  The arm loads the tanker and when complete, self-checks and then parks back in the parking position.

Decentralized decisions: The ability of cyber-physical systems to make decisions on their own and to perform their tasks as autonomously as possible. Only in the case of exceptions, interferences, or conflicting goals, are tasks delegated to a higher level. The operator is sitting in an office, somewhere in the world (possibly not on that beach bed).

The tanker disconnects and leaves, passing out through the security system and on its way.  It can be tracked, knowing that the purpose of the journey was not impeded by people, paper and dysfunctional systems.  It was safe, clean and efficient.  The duration of the tanker at site was known, from the moment it went through the security check.  Allowing more accurate planning and utilisation of the facility.

The reality is that most of this technology exists. Now. The bits that don’t, actually do, but no-one is financially motivated to disrupt the equilibrium of an industry that is seen as functional and relatively low cost.  Self-driving Tank trucks are already designed and systems are being tested for driverless vehicles.  Self-opening manholes exist.  Near field communications exist. Security scanners exist. Automated, self-locating Loading Arms (autoload®) exists.

Whether industry tries to purely recover the status quo or take a leap forward after Covid-19, remains to be seen.  But, what is certain, is that it needs to embrace the future to survive.

The first loading arm was developed and used in 1913.  We are still manually loading tank trucks & rail cars and using people to take the risks.  Does that sound right to you? 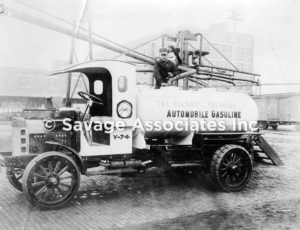 View the article in The Professional Engineering magazine here

Contact Us
The only requirement is knowing what’s needed and then delivering what’s...