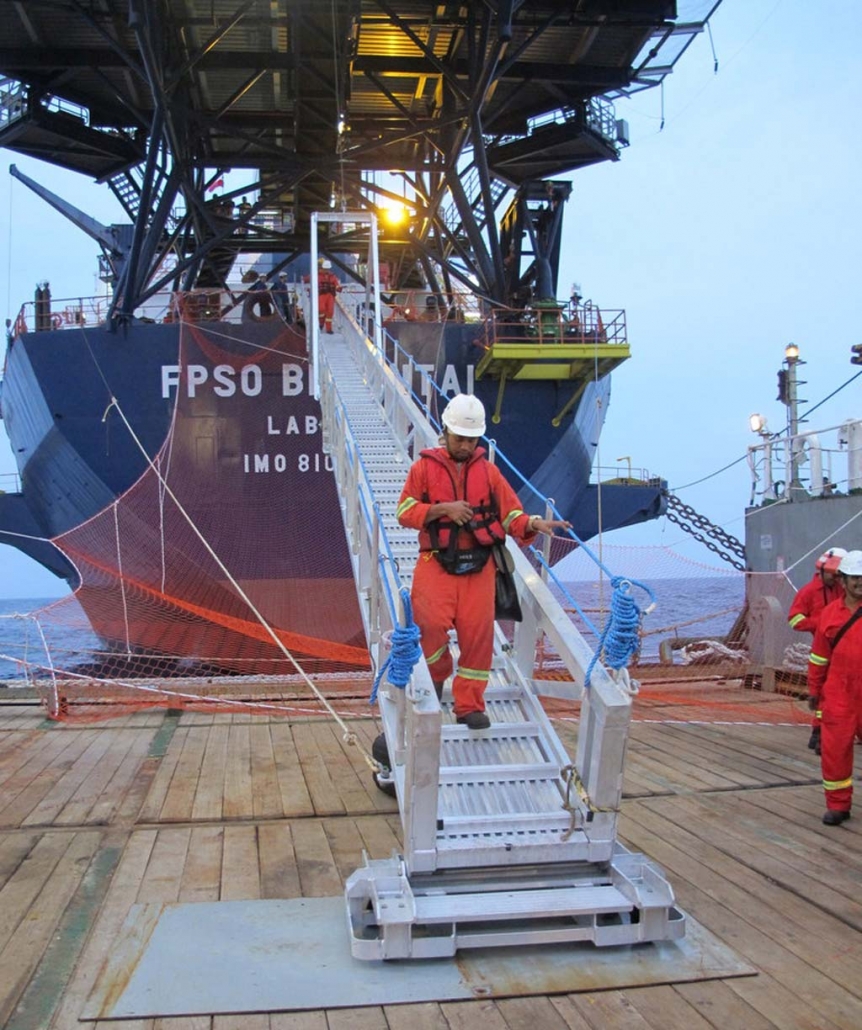 This article has been reproduced from Tank Storage Magazine June/July 2018 issue.

The variable and constantly moving gap between a marine vessel and the jetty or dock is an interesting problem.

Normally, the ship is at a port to load or unload cargo, passengers or liquids. It is, therefore, reasonable to assume that the height of the deck above water or jetty is a variable because of the changing cargo weight. Then, factor in tide variances. These are predictable and tabulated, so easy to establish. But, then there is wind. A chaos factor that is difficult to predict. Specifically, when designing a tower that has a design life of at least 25 years. So, wind speed and direction are taken from historical records. This leaves us with a high-high (highest tide with the largest unladen ship) and low-low (lowest tide and smallest laden ship).  This can be as little as 2m and as much as 25m.

Then we need to factor in the biggest variable of all - humans.

The void between ship and dock is between 2m and 25m above a strip of water bounded by a concrete jetty and a steel hull.  Arguably, a fall from 2m is survivable, but what about 50m?

What are the expectations for the captain of the visiting ship? Clear guidance to the jetty, easy and secure mooring with safe access to land for both crew and visiting officials.

While the captain does not own the jetty, there are still many instances where the jetty owners/operators believe that personnel transfer is not their problem and that the ship needs to make safe provision. The responsibility for safe access is always with the permanent feature (dock).

A question of safety

What should be considered next by the owners/operators of the jetty is how safe can the crossing be made? Unfortunately, this is often translated to ‘how cheaply can I make this problem go away?’

The correct answer to the first question is a solution that mitigates all imaginable risk to life, considering the hazardous nature of the task. The usual answer is a glorified gangplank, moved into position by a team of workers who also risk injury while manhandling the structure into place.

Does it depend what part of the world you are in? No

Does it depend on a history of previous accidents? No

Is it just a question of money? Surprisingly, no.

It is an attitude. A temporary approach to the infrastructure. A need to make profits at almost any expense. A lack of understanding of what the operators experience. Decisions made by people far removed from that watery void between ship and jetty.

The basic and common components may seem obvious, but in many cases are missing because most equipment around the world is home-made and is either inadequate or unsafe. Given the extreme angles that may be present for the gangway to span, the walkway is specially fabricated using curved or angled tread systems. These allow a non-slip walking surface through a large working angle. The marine tread allows operators to use the walkway as a staircase, even when it is horizontal.

The point at which the marine access system contacts the ship is vital and it is important to have as much information about this in advance of designing the solution. Ship handrails and available deck space all serve to complicate the arrangement.

The type and complexity of the marine access system will vary according to a wide number of factors including:

Marine access gangways can be simple bridges, moved into place manually by one operator. Simple, fixed length structures with hand and knee rail protection afforded by ropes and with a hook to secure the gangway onto the ship deck.

A variation on this is that it can be raised and lowered by a winch and cable, either manually or electrically. A further option is to use a crane, which can be used if the unit telescopes. If the gangway is a fixed length it can be powered by hydraulic cylinders and controlled from the jetty by a simple controller. The telescoping section can also be hydraulically controlled using motors. When it comes to marine super-tankers, the structure changes significantly. The gangway is likely to be fitted to a tower structure or column so that operators can climb a staircase to reach the optimal bridging level.

If the working range is too great and available jetty space is too small to allow a safe angle of access, the whole gangway can be mounted to the face of a tower. It can then travel vertically to ensure a safe working angle is maintained between ship and tower. The operators then have a choice of which level they can access the gangway to the ship. It is also possible to rotate and park parallel to the ship, thus avoiding potential clashes while the ship is manoeuvring.

On smaller jetties, vertical parking of the gangways is also possible.

The tower and column designs allow peripheral features to be installed such as fire-fighting systems, CCTV, crow’s nest, meteorological equipment and cranes.

Each system is fully assembled at the factory and cycle tested for customer approval before being broken down and shipped to site anywhere in the world.

Finally, there is a need to consider the practicalities of these systems. They need to work in a hostile environment, often close to the high-velocity transfer of volatile liquids. The marine gangway must work alongside large piping structures that move and are controlled by operators and computers, mostly working in isolation.

At the same time, consideration must be given to what happens when an emergency situation takes place. It is too late to suddenly think ‘I wish I’d bought the marine arms and marine gangways from the same company. At least I’d know for sure that they will not interfere with each other in an unpredictable situation’.

As more attention to safety at marine installations is taking place around the world it is paramount to select the right partner to assess, design and manufacture the right solution. A partner who can design, build and install marine gangways and marine arms to meet current and future needs.

Want to join the discussion?
Feel free to contribute!

A Question of Safety